posted courtesy of The Clackamas Review and Ellen Spitaleri; original URL is http://portlandtribune.com/cr/24-news/213133-70899-local-author-to-discuss-schizo-affective-disorder
Written by Ellen Spitaleri | in the print and online editions of the Clackamas Review, Wednesday, March 5, 2014
Sherry Joiner has been through it all: childhood abuse, the suicide of her mother, the death of her brother from AIDS, her own suicide attempts and above all, her diagnosis with schizo-affective disorder.

But now, Joiner, a Southeast Portland resident, has mastered her condition through counseling, therapy and medication, and she will be sharing her story on Tuesday, March 11, at a NAMI Clackamas County meeting in Milwaukie. 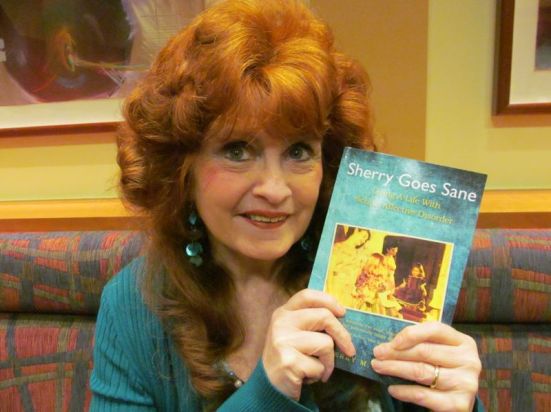 photo, ELLEN SPITALERI. Sherry Joiner holds a copy of her recently released book ‘Sherry Goes Sane.’ The cover features a photo of her and her Aunt Deanna.

During her hour-long presentation, Joiner will speak about her recently released memoir, “Sherry Goes Sane,” and will answers questions from the audience.

The public is invited to all monthly meetings of the local chapter of the National Alliance on Mental Illness, said Michele Veenker, the executive director of NAMI Clackamas County, based in Milwaukie.

The group asked Joiner to speak, Veenker said, “Because Sherry is a real inspiration and gives people hope for recovery. So many times when people come to us, they see no light at the end of the tunnel, and Sherry can help them see the light.”

For those unfamiliar with the organization, Veenker said, “NAMI Clackamas County is a grass-roots organization dedicated to improving the quality of life for everyone impacted by mental health issues through support, education and advocacy.”

Based on statistics from the National Institute of Mental Health, “just over 20 percent, or one in five children, either currently or at some point during their lives, have had a seriously debilitating mental disorder. That translates to 17,427 kids in Clackamas County. Another 50,403 adults in Clackamas County have a severe and persistent mental illness,” Veenker said.

She added, “I am involved with NAMI, because my daughter has bipolar disorder and I am not sure where we would be without NAMI. At the very least she would probably be on the street, if not dead. She is doing well now.”

NAMI Clackamas County offers free classes in both Milwaukie and Oregon City, and they are currently listed on the group’s website, namicc.org.

In her book, subtitled “Living a Life with Schizo-Affective Disorder,” Joiner is no-holds-barred in telling her story.

She realizes that the book is painful to read, but she wrote it “to help people with mental health issues know they can have a happy, useful life. I was willing to put myself on the line and tell all my experiences to show that people can overcome schizo-affective disorder, despite the hallucinations and distress, through medication and by seeing counselors and doctors.”

Her friends have found the book to be an “eye opener,” she said, adding that the book has also helped people in the mental-health care system understand that “we need more free clinics and more access to newer prescribed drugs to help others in this condition.”

She originally began writing the book as an autobiography in 1999, but then changed it into a memoir; that process took about three years, and the book was released through CreateSpace in 2013.

As she was writing the book, she noticed that she was focusing on deaths and abuse, reliving the past every time she re-read what she had written. After a while, she felt like she was reading about someone else’s life, but in the end, the process of the book allowed her to heal, Joiner noted.

“Sherry Goes Sane” is available on CreateSpace.com and Amazon.com; it will be available on Kindle after March 10, and people may buy it through Barnes & Noble in six to eight weeks.

Schizo-affective disorder is a paranoid-schizophrenia and bipolar disorder, accompanied by mood swings and depression.

“With the disorder, I get paranoia, illusions of grandeur, hallucinations and thinking that my dreams are real. With the bipolar part, I get into a high mood, and then in an instant come down into a depression, crying my eyes out,” Joiner said.

Now, with the help of her doctor, Ward T. Smith, she is on a drug she calls a godsend.

On this drug, she said, she is able to think clearly and eat and sleep regularly. She has written a wellness plan for herself that includes seeing a psychiatrist and a counselor monthly, staying on her medication and interacting with family and friends.

Joiner has also found peace through painting, noting that “art is very therapeutic and helps me get rid of the confusion and find something beautiful. As I paint, I get rid of my past judgments and conflicts; I think of my mother’s and brother’s deaths and death becomes a sweet retrospection.”

Joiner has attended college, worked in child care and as a nursing assistant and home-health aid, but right now she is focusing on being a speaker for NAMI’s Our Own Voice program, which takes her to universities, hospitals and research centers in the Portland area.

In February 2011, Joiner had the opportunity to meet President Obama when he visited Intel, due to her work with the political organization Ladies in Blue.

She told him it was a pleasure to meet him, and then she told him about how she was one of the women fighting for equal pay back in the early 1970s; she even received a settlement from the state’s attorney general at the time, saying that he hoped there would be no more unequal pay and discrimination in the workplace.

And what was the president’s reaction?

She is an active artist, belonging to the Oregon Society of Artists and exhibiting her paintings in various galleries and benefit art shows, particularly NAMI’s Music and Art for the Mind event.

She added, “After I help someone I feel better about myself. If I can do something to prevent people from going off the deep end, in return it helps me learn how to cope with my own condition.”

Details: All are welcome to attend this event, set up for those dealing with mental illness and their families and friends. Dinner is pay-as-you-can and the program is free. After the speech, support groups will split off for more discussion.

Websites: For more information about NAMI Clackamas County, including a class schedule, visit namicc.org. Email Michele Veenker at michele@namicc.org or call the office at 503-344-5050.

For more information about Sherry Joiner, and to see her artwork and read her blog, visit her website at ArtsAndWritingbySherry.com.

Learn more about the book

Buy Sherry Goes Sane from me!

9/21/19 NAMI Clackamas Roaring Twenties Benefit Auction at Gray Gables Estate, 3009 SE Chestnut Portland, Oregon. Sherry entered her portrait of a “Flapper,” in a silent auction that was bid on and donated to NAMI Clackamas office.

2/19/19-3/5/19 Sherry exhibits her paintings at the Cerimon House Main Gallery, for Her Art, A Collection of Women’s Art Exhibit.

7/6/17 ‘Americana’ First Friday in Milwaukie at the Key Bank Booth, Sherry signs books and offers a chance to take picture with her painting- ‘Return to American Gothic,’ 5-9 pm.

2/22/17  Sherry speaks at the ‘Evening With An Expert’ Speaker-Sherry Goes Sane, Everything You Wanted to Know about Schizoaffective Disorder at Providence Glisan Hospital, Social Room, 6-8 pm.

7/27/15 Sherry has a radio interview with KBOO Community Radio- 90.7 FM at 11 AM. Portland, Oregon. Broadcasts on air to Vancouver, WA., Corvallis, Hood River, and outlying areas.

2/12/15  Sherry talks with the State Legislatures in Salem, Oregon about mental health.

10/2/14 Sherry has a radio interview with Chrissie Hodges, ‘The Stigma of Mental Illness Radio Show,’ www.cosmicbroadcasting at 2pm.